In the 2017 financial year, the Amazone Group has grown yet again with the consolidated total turnover, without taking the trading volume into consideration, going up to 457 million €. This sets a new record in the company’s history and, in comparison to the previous year (406 million €), this represents a growth in turnover of 12.6 %.

A pleasingly demand for its new models showed equally across all of the Amazone competence sectors with the turnover in soil tillage and crop protection developing above average. And with an export share of around 80 %, significant turnover increases were recorded in Poland, Rumania, Ukraine, Kazakhstan, South Africa and Belarus. A positive growth in turnover was also seen in the important markets of Germany and Austria, with sales for 2017 in France also developing better than originally expected.

In 2017, in total, around 1,850 people were employed by Amazone, among them 130 apprentices. The company has invested more than 7 % of the turnover in the area of research and development whereas investment in tangible assets amounted to more than 15 million €.

The Amazone directors, Christian Dreyer and Dr. Justus Dreyer, see the company on a stable, successful course. “The excellent result for 2017 shows that our innovations, along with continuing, strengthened engagement in many of our markets is bearing fruit. Together with our sales partners, who again did an excellent job, we are well positioned as the specialists for Intelligent Crop Production. All over the world, innovative machinery and systems are in demand, which are not only more efficient, but which operate with even more precision and offer still further more operational comfort. For this, and with our current machinery programme, we offer farmers, and also agricultural contractors, the optimum technology for use on any farm size.”

Continuing expansion of the factory sites

One most important milestone in the expansion of Amazonen-Werke came in August 2017 when the signal was given for the first new buildings to be erected at the newly founded site in Bramsche. On the site which, in total, covers 24 hectares, Amazone is currently building, as its first step, assembly and storage halls with a total floor area of 16,000 m² along with an administration building. The total investment in this site amounts to around 16 million Euros. In the new halls, in future, the final assembly of the Amazone UX trailed sprayers will take place.

At the Hude-Altmoorhausen factory, the official opening of the new KTL paint facility was on the agenda in April 2017. The plant, built on a roofed area of approximately 8,000 m², is designed to be able to cope with coating a surface area of 750,000 m² per year.

In Mosonmagyaróvár in Hungary, where, in autumn 2016, Amazone bought the plough production from Vogel & Noot, the production of the Cayros ploughs has further expanded. Here, in particular, the modernisation of the production facility was invested in heavily. This will continue in 2018, inter alia, with an investment of more than 1 million € in a new machine shop.

The special events of the previous year include the international Amazone sales partner days at the Hude-Altmoorhausen factory. About 700 sales partners from Germany and 27 export countries made use of this event to get to know the details of all Amazone’s innovations prior to Agritechnica 2017.

The range of soil tillage implements at the exhibition showed again that Amazone, with its rotary harrows and cultivators, compact disc harrows, cultivators and ploughs belongs amongst the top suppliers in this sector. After the purchase of the plough factory from Vogel & Noot, Amazone offers a very comprehensive plough programme that now also includes a new semi-mounted reversible plough in up to 8 furrows.

Three of the Amazone innovations, introduced at Agritechnica, were each awarded a silver medal. So, Amazone again proved its position as one of the most innovative manufacturers of agricultural machinery.

For the year to come, the directors are adhering to the objective “company growth with a sense of proportion” and the continuation in the innovative leadership across the Amazone core competences. In addition to the objective, to also develop machines which result in even more precision and contribute to further cost savings and hence they see the switch to Agriculture 4.0 as an important future topic. Here, under the key word “Amazone 4.0”, developments are planned that assist in the digital networking of agricultural systems in able to exploit yet further potential optimisation.

The directors are confident that the turnover will again develop positively in 2018. “Already in the last months of the previous year, it has shown that the climate for investment in agriculture is positive. At the same time, the customers’ interest in modern agricultural machinery and the demand for our innovations is so big that we reckon also on a further increase in turnover in the year to come.” 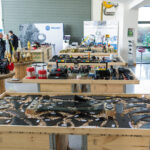 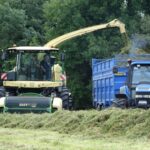